Girder Bridge is the most common and basic bridge type. In its simplest form, a log across a creek is an example of a girder bridge; the two most common girders are I-beam girders and box-girders used in steel girder bridges. Examining the cross-section of the I-Beam speaks for its so name. The vertical plate in the middle is known as the web, and the top and bottom plates are referred to as flanges.

A box girder takes the shape of a box. The typical box girder has two webs and two flanges. However, in some cases there are more than two webs, creating a multiple chamber box girder. Other examples of simple girders include pi girders, named for their likeness to the mathematical symbol for pi, and T shaped girders. Since the majority of girder bridges these days are built with a box or I-beam girders we will skip the specifics of these rarer cases.

An I-beam is very simple to design and build; it works very well in most cases. However, if the bridge contains any curves, the beams become subject to twisting forces, also known as torque. The added second web in a box girder adds stability and increases resistance to twisting forces. This makes the box girder the ideal choice for bridges with any significant curve in them. Box girders, being more stable are also able to span greater distances and are often used for longer spans, where I-beams would not be sufficiently strong or stable. However, the design and fabrication of box girders are more difficult than that of I beam. For example, in order to weld the inside seams of a box girder, a human or welding robot must be able to operate inside the box girder. 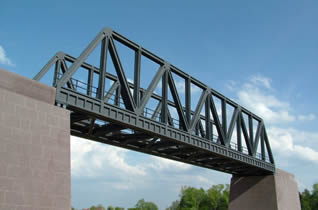